A couple of days ago, I was searching the internet for 2016’s best and most popular breeds of pet dogs. Amongst breeds like golden retrievers and terriers, I came across the breed of French bull dogs which were very much in demand with photos of French bull dog puppies, which by the way are the cutest ever puppies, with their flat squashed noses, round face and big eyes. As I read more and more I began to understand the popularity of these dogs. It was so difficult to resist their cuteness quotient that would melt the toughest heart, when they saw pictures of the cute bluish purplish black puppies with the most beautiful soulful brown eyes, Blue French Bull Dogs do truly have the cutest pups. Blue French bull dogs have been very popular over the last two centuries, as pets and companions especially amongst the rich and famous including many Hollywood celebrities not to say the least.

That’s not all, there are many French bull dogs who are celebrities in their own right and not vicariously through their famous owners. From being the stars of commercials for Audi, and vintage ones for Jaguar to facebook pages live uploads and huge facebook fan followings and also appearances as stars of TV sitcoms and Hollywood films. 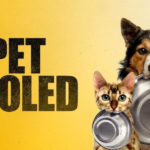 Pet Fooled : The Netflix Documentary – My Thoughts
Scroll to top